Every business, society, and nation on the planet is facing challenges due to the growing population, scarcity of natural resources, and climate change, the world is turning to automation for answers. The reason behind this shift is clear, smart factory automation brings a whole new level of efficiency to manufacturing. This lead to saving time, labor, energy, and natural resources. It can also be stated that automation is a way of saving the planet we live on!
In this blog, we’ll cover the meaning of automation, the need, and the role of automation in manufacturing.

So let’s get started!

What Is Industrial Automation?

Automation is the use of machines to carry out manufacturing processes with less human intervention. In order to optimize operations, the implementation of industrial automation will allow utilizing these processes. Manufacturers use machines that are operated through different control systems, like programmable logic controllers PLCs, human machines interfaces, or HMI and robotics.

Automation uses logic and programming to feed the machine information on how to carry out a function. These machines allow for high control, which improves manufacturing performance.
For repetitive tasks, hard or fixed automation is made for use with high turnout rates. Programmable automation is used in the case of batch production, where the automation process can be modified. On the other hand, soft automation allows for flexibility and changes in products quickly and easily.

Need For Role of Automation In Manufacturing

There is a high need for automation in future manufacturing as following are the reasons behind it:

1. Robots are machines designed to carry out specific repetitive tasks with minimal human interventions and a high degree of precision.

2. Machines were invented to save labor and to make work more efficient, the drawback of machinery is that it requires human operations and humans have a high level of viability.

3. As per many reports, the average employee makes over a hundred mistakes per year, which multiplied by the total number of employees in the company can add up to a thousand or even tens of thousands of mistakes per annum.

4. Thus, this in turn may cost the company millions in revenue. The problem is exonerated because products manufactured, assembled, packaged, measured, etc. are often costly to replace when damaged. In addition to this, the cost gets multiplied when the machinery itself gets damaged.

5. Not to mention, apart from the cost of repair or damage due to human errors. There is an inherent risk of operating any kind of machinery as well. Not merely to the operator, but to the object upon which the machinery is used.

6. The unpredictable nature of human beings increases the risks; sickness, inattention, insufficient or inadequate training, drug or alcohol use, incompetence, and there are various other factors in the bucket. All these factors can lead to the interaction between humans and machines being inefficient and in some cases dangerous.

7. On contrary to this, robots have a wide range of benefits that include; increased productivity and throughput, increased efficiency, increased speed, improved safety, and multilevel cost-effectiveness.

8. Automated machines/robots do not take sick days. Programmable automation means that the operation of the robots can be changed without time and money spent on training the operator in setting a new set of tasks. Also, robots also offer better manpower distribution.

9. In many situations, autonomous robots will get used with automation in future manufacturing. The situation that requires a repetitious process; automated guided vehicles, 3D printers, vision systems, sensors, and packaging systems are a few examples of autonomous robotics in action.

Benefits Of The Role Of Automation In Manufacturing

Some benefits of automation in the manufacturing industry include; high reliability, increased productivity, quality enhancement, and reduced labour expenses. Human labour comes with an inherent margin of error, while machines are less prone to make mistakes. Thus, automation increases the accuracy of work. Automation speed up the production time.

The real promise of smart factory automation is to make companies more productive, and competitive, enabling the economic and social well-being of societies and nations. This will lead to making the entire world more sustainable in its consumption of energy and natural resources. This is what the role of automation in manufacturing is all about, leading the way to a smarter future for manufacturing.

Are you looking to implement automation into manufacturing? If yes, so, please feel free to contact us at support@aeologic.com

How can the Internet of Things Transforms Businesses?

How IoT is Transforming the Hospitality Business? 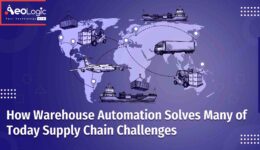 How Warehouse Automation Solves Many of Today’s Supply Chain Challenges

How To CRM Help the Retail & Distribution Industry Improve Sales, Processes, and Reporting?