In recent years the impact of Artificial Intelligence (AI) has penetrated to various sectors and industries globally. As we enter a new decade of 2020, one industry that AI can benefit mankind the most is the Healthcare industry. As per a report published by Statista, the global market size for artificial intelligence until 2017 was only $1 billion, but this will reach $25 billion by 2025.

In this article, we will see how AI has been contributing to the healthcare sector, the current challenges and how the future looks like.

The attempt to use artificial intelligence in healthcare dates back to the 1970s when researchers built an expert system known as Mycin that was capable of identifying infection-causing bacteria and could recommend antibiotics.

The expert systems overall lost its popularity in the 1980s and cut back to the current times, modern machine learning and deep learning techniques are now delivering promises to completely transform the healthcare sector as we know it today.

Let us see some of the key areas of AI contribution to healthcare.

AI can help doctors and radiologists to diagnose or detect certain disease with more accuracy and sometimes at an early stage that can be life-saving for many. In 2018, research showed that a deep learning convolutional network could detect skin cancer with an accuracy of 95%, whereas the dermatologist experts could achieve only 86.6 %.

In January 2020, it was announced that in one research, Google’s AI was able to detect breast cancer better than actual radiologists. AI was able to reduce both false positive and false negative by as much as 5.7% and 9.4% respectively.

The correlation of diseases within a family or within a community associated with geography or race could be identified by applying artificial intelligence on historical medical and genome records. This information can be used to give a risk marker to the people for timely preventive measures.

On a more global scale, predictive analysis can also be used to predict the global outbreaks of diseases. The recent outbreak of Coronavirus in January 2020 was already predicted by a Bluedot company by as early as December 2019. They used huge data of online news, government data, data of animal and plant diseases and zeroed into Wuhan, China as a possible red zone for a potential virus outbreak well in advance.

A big advantage of such a system is that it can be used by hospitals in smaller cities and villages where there is a dearth of expert doctors.

Drug discovery is a process of creating new drugs in R&D centers for curing diseases. But the process is not very simple and requires biological and chemistry expertise to propose new drug formula which fails more often than not during clinical trials.

Researchers are using AI not only in predicting new drug combinations but also if these drugs would actually pass clinical trials.

Challenges of AI in Healthcare

Though the promise is real but there are many challenges in the adoption of AI into healthcare. Let us discuss some of the key issues.

AI will never be able to replace doctors, not at least in the distant future. But it can become a great tool and enablers for the healthcare sector to work with in the future. AeoLogic Technologies is also embarked on a journey to the future and is leveraging artificial intelligence in multiple sectors including healthcare in the most innovative way possible.

Role and Impact of Big Data in the Accounting Industry 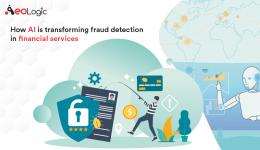 How AI is Transforming Fraud Detection in Financial Services

How Technology Plays a Role in Modern Manufacturing

What’s new for developers in WWDC 2019