RFID (Radio Frequency Identification) is the latest technology which is very accurate and precise to be used in libraries. The theft detection systems are purely based on RFID. The RFID-based systems that makes libraries smarter and helps to detect the unauthorized removal of library materials, speeding staff charge and discharge, simplify and speed patron self-charge and self-discharge, support electronic based inventory, rapid shelf searching and an interactive interface with materials handling systems.

RFID is a compact combination of radio-frequency-based technology and microchip technology. The information contained on microchips or in the tags are affixed to library items and are being readable using reader/scanner via radio frequency technology. An RFID reader or scanner also known as sensor or interrogator looks for antennae on the tags to receives radio signals to capture its information from the microchips through them. The tags used in RFID systems replaced both EM or RF theft detection tags or targets and barcodes due to its advantages over several aspects.

The use of RFID reduces the amount of time required to perform checks over the library materials. The most significant comparison we can make by looking on the fact that that the information can be read from RFID tags faster than that of barcodes. That is due to the fact that the RFID tags are capable to read the tag from any angle. Also, if there are several items that several items in a stack can be read at the same time. That what makes RFID enabled systems not only faster and reliable but also be able to support electronic inventorying of materials on the shelves with the help of portable handheld devices.

For patrons using self-charging, there is a remarkable improvement because they do not have to be a part of charging the book bearer and carefully place materials within a designated template. Also, they can charge several items at the same time. Patron self-discharging, which can be achieved by installing readers or scanners on book drops or with self-discharge stations. This gives time to staffs to focus on the best customer service.

The readers are highly reliable. The readers which were used in the past was sometimes giving false alarms. However, with time and R&D over several aspects this scenario was also kept under consideration and now the false alarm has been reduced to 75 to 90%. We Aeologic, performs several tests before handling over the system so that this possibility gets eliminated from the existing system.

In some library, RFID systems have an interface between the exit sensors and the circulation module of an integrated library system is to identify the items moving out of the facility. In such case with the help of RFID system we can identify the items detail which is being stolen. Also, It is likely more possible to catch the exact person if the patron has RFID tag with him by integrating alarm on passing the reader with RFID tag attached.

A unique advantage of RFID systems is their ability to scan materials on the shelves without tipping them out or removing them to access the barcodes. A hand-held portable reader can be moved across a shelf of books at a distance to read all of the unique identification information. Using wireless technology, it is possible not only to update the inventory, but also to identify items that are out of proper order. This also comes in handy when tag number of missing items are entered into an inventory reader, it is possible to search for missing items on the shelves.

Another application of RFID technology is with materials handling. It is a system that consists of conveyors and sorting equipment that moves library materials and sort them. This significantly reduces the number of staff hard work and time required to arranging the books and reshelving the selves. Given the high cost of the equipment, especially for systems with five or more bins or carts, this application has not been widely used.

While library RFID systems is a great deal, it comes with costs. However, it is a one-time investment and does not require to spend fortunes every month or year. RFID itself is known for its long life; it provides same accuracy even after decades.

Top 5 Reasons for Using RFID in The Warehouse

How Mobile App Development Is Reshaping The Manufacturing Industry? 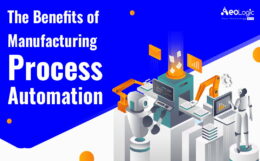 The Benefits of Manufacturing Process Automation