The 21st century is referred to as being driven by information technology. It is the center of global attraction in India which is considered a center of knowledge. The IT industry is the future of India. The sectors covered by the IT industry are IT services, information technology-based services (ITES), e-commerce (e-commerce), software and hardware products. IT services are a requirement for any organization to increase productivity, ease of doing business, to grow efficiently and economically in this competitive world.

In a report, the Indian IT industry has more than 17,000 companies. Of which more than 1,000 are large companies having more than 50 delivery sites in India. The country’s cost competitiveness in providing IT services, is almost 3-4 times more cost-effective than the United States. It is its unique selling proposition in the global procurement market.

Also read: Importance of Cybersecurity in the Education Sector in 2022

The explosive growth of the IT industry in India over the past two decades has changed the global perception of India’s reservoir. It considers its knowledge and skills as well as its explosive economic growth. Rapid progress within the IT industry and liberalization policies such as the lowering of trade barriers and removal of import duties on technology products by the Indian government are instrumental in the evolution of this industry. In addition, various other government initiatives such as the establishment of Software Technology Parks (STPs), Export Oriented Units (EOUs), Special Economic Zones (SEZs), and Foreign Direct Investments (FDI) have helped this industry to establish itself as a leader in the sector. global computer industry.

Following are the major technology predictions which prove that the IT industry is the future of India.

Almost every industry, including education, SMB, healthcare, and the public sector, is looking to move to cloud computing. In recent years, mass cloud adoption has been seen primarily in finance, accounting, supply chain, logistics, and IT management. While digital transformation is recognized as indispensable for the growth of the country. The cloud service has a significant presence in the Internet world and is rapidly growing to become a complete environment. Its security capabilities have shown promise in the IT industry, making it a priority for protecting data and application infrastructure. Hence, it shows that the IT industry is the future of India.

With the integration of AI and automation, intelligent automation is beginning to transform the way business is conducted in almost every sector of the economy. It detects and synthesizes a large volume of information and can automate entire processes or workflows, learning and adapting on the fly. Global investment in intelligent automation systems is driven primarily by the retail sector, BFSI, and CPG (Consumer Packaged Goods). In India, the IT industry is expected to invest huge capital in effective automation and AI plans in the coming years. Again, it predicts that the IT industry is the future of India.

Blockchain has generated tremendous interest across industries and several countries have realized its immense potential in their economy. In India, the adoption of this disruptive technology saw a huge surge in 2016. Resulting in several banks and business conglomerates experimenting with it in various use cases. Bitcoin is the most common use of Blockchain. It has been carefully selected in the country with various Bitcoin exchanges and wallets spread across the country. Since the government is the most important actor and enabler of blockchain, India’s BFSI is leading the adoption.

India’s technology services industry could hit $300-350 billion in annual revenue by 2025 if it can harness the emerging business potential of cloud, AI, cybersecurity, and other technologies emerging. According to a report by NASSCOM, it says domestic technology services could accelerate growth by between 2% and 4%. Over the next five years, industries around the world continue to see rapid adoption of digitalization. Thus, it can recover faster from disruptions induced by the covid.

The future belongs to India with a lot of work in different parts of the world and the location of Indian experts across the globe. The central government has launched a process of transformation in the education sector. In the coming years, the final year of a degree will be treated as an R&D year and the program is developed based on the latest technological advances, skills, and knowledge. This will surely add value to our graduates not only as job seekers but they will also be job creators. Therefore, all the developments conclude that the IT industry is the future of India.

Are you looking to integrate these technology trends into your business? If yes, then kindly connect with Aeologic Technologies.

How IT industry is developing in India?

The IT industry in India consists of more than 17,000 companies which are growing year by year. And more than 1,000 of them are big companies that have more than 50 delivery locations in India. The cost-effective competitiveness of the IT industry of India is around 3-4 times more than the US, which is its unique selling proposition in the world market.

What is the future of the IT sector in India?

The IT sector in India is one of the largest employers in the private industry. The IT sector accounted for 8% GDP of India in 2020. According to a study conducted by Gartner, investment in the IT industry of India was predicted to be the US $81.89 billion in 2021 and further increase to the US $ 101.8 billion in 2022.

Why Automation is the Key to Fixing Prior Authorization

The Use of Big Data In Manufacturing Industry

The Role of the Internet of Things in Healthcare 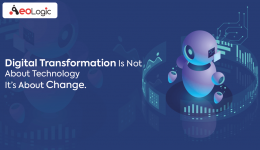 Digital Transformation Is Not About Technology—It’s About Change